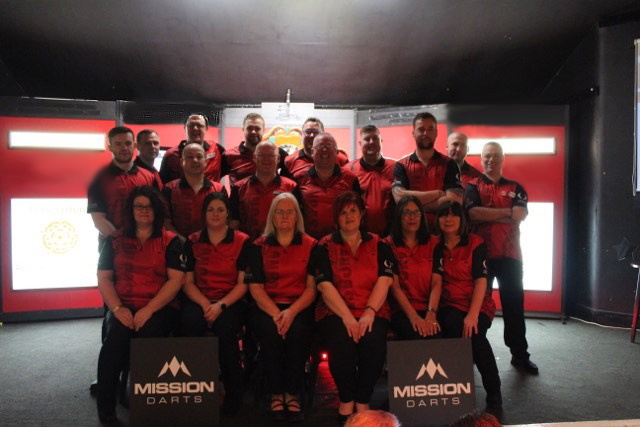 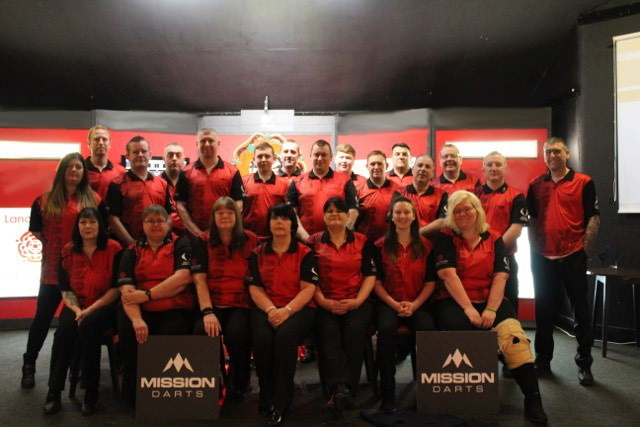 Following the retirement of Maureen Parr (see below) we are delighted to announce that the role of Ladies Team Manager has been filled by Sue Cusick.

Our thanks and best wishes go to Sue on this appointment and we offer her our support in carrying out her duties.

We are sorry to announce that our long-serving Ladies Team Manager, Maureen Parr, has chosen to step down.

We are sorry to announce that our long-serving Ladies Team Manager, Maureen Parr, has chosen to step down.

Maureen's time with the Lancashire Darts County Squad began in 1986 when she was first named as a reserve. She played her first match on 17th October 1987 against Hampshire, all the more memorable for Maureen as she originally came from Southampton.

A few years later, Maureen took on the role of Ladies Team Manager, remaining in that position until now. Her County career lasted 26 years with the final game in that distinguished career being on 1st December 2013 against Glamorgan.

Maureen's dedication to the County is exemplified by the fact that she missed only 3 County games in the 35 years between her 1st reserve position and stepping down now.

Lancashire Darts owe Maureen a huge debt of gratitude for the commitment she has demonstrated in leading by example.

Thank you Maureen, you will be sorely missed.

Lancashire Darts, being a member County of England Darts, recently received a letter detailing the benefits of membership for all of our players.You can see the letter here.

The 10th and 11th fixtures of the National League Season are going to be played over a single weekend.

The 10th and 11th fixtures of the National League Season are going to be played over a single weekend. All 24 teams from the top 2 divisions (Premiership and Championship) will be meeting at the same venue with games being played in a multi-board setup.

The fixture list tells us that Lancshire will play Cornwall on the Saturday and London on the Sunday. However, questions were raised at the zoom meeting held 2 days ago and we were told that discussions are ongoing on this subject. It may transpire that the B matches will be played on the Saturday with the A matches taking place on the Sunday.

At this point the venue for the weekend has not been confirmed.

We will keep you informed as and when the final decisions are passed on to us. 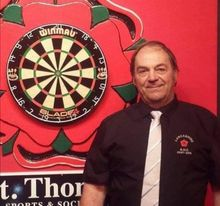 Malc’s knowledge of our sport, especially the county side, was second to none. If you asked a question he would know the answer or go away and find it. Today, no amount of statistics can do justice to Malcolm’s dedication. He was simply a top bloke.

To his family we send our heartfelt condolences. You meant the world to him.

As the snow falls and the sun breaks through the clouds, I wipe away the mist from my eyes and recall our last conversation. It was an all too familiar one this year, regarding the passing of a dear member. At the end of the chat his last words to me were ‘Dave, who is going to write my obituary?’

Well pal there you go. I will miss you as will our extended darts family. Legend is a word too readily used these days but I can’t think of a better one to describe Malcolm. 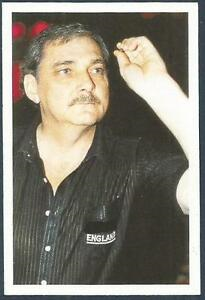 This pandemic has devasted us all in the last 8 months, with not only personal family losses but also fellow Darts Players that we have played alongside, befriended or grew up with watching their prowess from the comfort of our armchairs. The sad news yesterday of the passing of a Darting Legend has devastated us all.

Alan Glazier was one of the first dart players to turn professional in the 1970’s, a pioneer, and took part in the very 1st World Professional. He was without doubt one of the best loved players of his time, and became a household name in the game of darts. He earned himself a strong female following, presumably for his magnetic charm, good looks, and his warm friendly smile, you could not fail but to like him.

His nickname of The Ton Machine, was due to his consistency on the board, and he also earned the nickname of the Man in Black, for his choice of playing outfits. He was a Left Handed player and was among only a handful of lefties that reached that standard at the time, and had a glittering career.

As a founder player in the B.D.O. Inter Counties League, he played for Olly Croft's London Team throughout the 70’s. In the BICC Alan holds the record for representing more counties than any other player. He has played for 6 different counties over a 28 year period namely, London, Durham, Derbyshire, Bedfordshire, Surrey, London again, then finally Lancashire.

His Statistics over the years are impressive and include The World Professional, where his best result was losing in the Semi Final to Eric Bristow in 1986. In 1979 he reached the Final of the News of the World losing to Bobby George. Without doubt his two great highlights were in his early career, where he won the North American Open in 1977 and the Swedish Open in 1978. I know that he lived for the sport and could possibly have achieved more than he did, but I feel the enjoyment and buzz of being on stage in front of an audience meant just as much to him as that feeling of winning brought.

He came to live in Morecambe in the early 90’s then in later years moved to Rochdale, where he lived. Unfortunately, on Wednesday night, he was rushed into hospital and despite the efforts of the nursing staff, died with his partner Christine by his side. He was 81.

Outside of Competitive darts Alan loved to do Exhibitions, of which I am sure most of you reading this obituary will have witnessed the showmanship of the Ton Machine. Many tales of his trick shots are echoed around the country, and probably most, if not all, are true. I personally booked him to play an exhibition twice at my local club, and he always played to a full house, and an appreciative audience went away fully entertained. He appeared on Bullseye 15 times throughout the years and has represented his Country (England) no less than 27 times. His professional career ended in 1997 after a 24 year run within the B.D.O. and, as I said earlier, continued to do exhibitions and also sell his own brand of darts modelled off the ones he used to win the North American and Swedish Opens etc.

So much can be said about a man whose career lasted so long that its best you as his friends should sit back to recall your own encounters with Alan and remember him fondly.

In finishing the World of Darts has lost one of the all-time crowd pullers, and greats, and I'm sure you will all agree we have been lucky and grateful to have known him and honoured to have been part of his life. 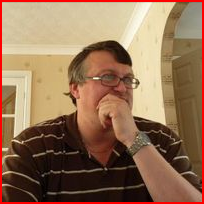 We have been informed by his family that Andy Dowson passed away on Friday 6th November 2020 after suffering a heart attack. Andy was 56 years old.

Andy was much loved and respected by many within Lancashire darts. Andy formed Chorley Central Super League team a few years ago and was the delegate/captain right from the start. He also was co-opted onto the Lancashire committee as a divisional controller.

Andy was often volcal about being a Yorkshireman and took great pleasure many times in letting everyone know on the final game of the county season.

We here at Lancashire GMC would like to pass our condolences onto all Andy's family at this sad time.

The news of a friends passing, is always hard to to take 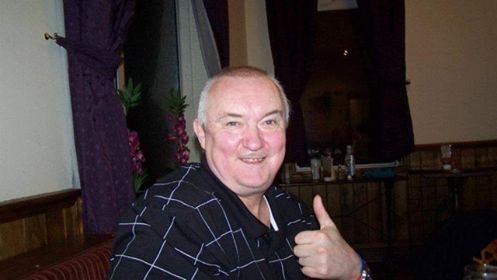 The news of a friends passing is always hard to to take, but with Geoff's passing, it has left a lot of people, besides myself, in total shock. Geoff was an inspiration and always gave encouragement and advice, whenever possible, to all players whether you wanted it or not. His darts career in Lancashire was quite widespread from the North of the County to the South. In the 1970’s and 80’s Geoff played Superleague with the Blackpool Team for 2 terms playing alongside the likes of George Walsh, Alan Groves, Eric Day etc, and in the interim played for Fleetwood with Tommy Thompson's side. Then in the 90’s Geoff moved to Oldham where he continued to play Superleague Darts in both Oldham and Rochdale, and did so up until his sad passing. Even after more than 40 years in the game he was still playing at a high standard alongside some of Lancashire's finest players, too many to mention.

Geoff also had a somewhat glittering career in International Darts, playing for Wales qualifying through his grandparents who lived in Wales, I am informed. He proudly wore the National Shirt 8 times winning 3, and was so proud to have that on his darts C.V. He was also a member of the Welsh team in Helsinki, Finland for the Europe Cup in 1992, where he reached the last 32 in the World Singles Event.

His Lancashire Records are impressive! Not only did he represent Lancashire as a player but became Lancashire Mens Captain for a number of years. He loved his County Darts so much that after he finished playing for Lancashire, he would still pop in whenever he could to support the Red Rose Team, especially the Yorkshire Matches. He was a wealth of information on the History of past darts matches, ie Names, Averages, Check Outs, remembering stats and relating stories that everyone else had forgotten.

Not many players reach 100 Appearances for Lancashire, so when they do it is lauded by the Darting Fraternity. Not only did he reach 100 but he eclipsed it with a total of 141 games.

Geoff's final Stats for Lancashire were :-

Geoff certainly left his footprint within the Darting Fraternity, leaving friends all over the globe with fond memories, but most importantly he leaves this Life as one of the most respected and well thought of people in Lancashire darts. We will always remember those dulcet tones - whenever he was in the room, you knew! His broad accent and cheeky laugh were unmistakably his alone. The anecdotes and stories will continue to influence us all for many years to come. We at Lancashire Darts offer our heartfelt sympathy to his family at this time and share your loss.

From all in Lancashire, your Team mates, friends and everyone that knew you, we raise a glass in your memory.

Following the votes cast by our membership, the Lancashire GMC Darts Organisation

Following the votes cast by our membership, the Lancashire GMC Darts Organisation have joined the United Kingdom Darts Association (UKDA).

Our members voted overwhelmingly in favour of UKDA, with a total of 54 casting their vote in UKDA's favour. The other votes cast were: BDO - 1 vote; Tri-Nations - 4 votes.

We now look forward to COVID-19 restrictions being safely lifted to enable our next season to commence.

The first Lancashire Darts Online Open was played on Sunday 5th July with 38 players participating. Results from the last 8 to the final are listed below.

Lancashire played Buckinghamshire in an online County match on Friday 3rd July 2020. The match was played over 3 games - see below for the overall and game results.

Lancashire's Inter-County History is now available to view on our Inter-County website. Click/tap "Inter-County" in the menu then select any season from 1978-1979 to 2019-2020.

Massive thanks go to our Honorary President, Malcolm Poole, for the enormous effort he has put into providing this historic material.